Breeding information: Breeding may occur all year, but summer and fall are the peak times.  Females build nests out of sticks and leaves, usually in upper floors of buildings or trees.   The gestation period lasts from 21-29 days resulting in 6-12 (average 8) offspring. Females can have up to 5 litters in a year. The young open their eyes after 15 days and are weaned by the 3rd or 4th week.   Young rats can breed in 3-5 months.

Status in Tennessee: The Roof Rat may be abundant in some areas.   This rat also produces a considerable amount of damage to property and foods, and carries a large number of communicable diseases. Source

Roof rats are known by a variety of names such as the fruit rat, ship rat, citrus rat et cetera. They have a distinct appearance; usually black or dark brown with smooth fur, a very long tail, large eyes and ears and a pointy face. Roof rats are adept climbers and usually prefer to build their nests above ground. Outdoors, roof rats’ nests can be found in trees, dense vegetation and woodpiles. Indoors, they prefer to live in the upper levels of the building like the attic, ceiling, rafters and cabinets. Roof rats prefer a diet of fruits and nuts, however, like most rodents, they are omnivores and will eat almost anything when hungry. This could be meat, vegetables, tree bark, grains, insects and even pet foods. These pesky rodents are known to hoard food and stash it in their nesting places. They also prefer to nest in areas where they can easily get water to sustain them, even if it means chewing through water pipes.

Homeowners in Germantown, TN and Collierville are making shocking discoveries in their attics. Rats are invading homes by way of the roofs, and pest control companies are busy trying to get the persistent problem under control. “I’m actually shocked to go into attics and not find evidence,” said Wildlife Solvers employee Chris Settle. “I’ve been in multiple attics, not animal related, and found evidence of animals.” Settle’s job for the last 10 years has been removing rats, squirrels and other unwanted pets out of homes. “I had a customer, she had roof rats,” Settle recalled. “We did the job, fortunately. There was close to about 40 rats that were stuck in the attic when we did it.” Photos sent to the WMC Action News 5 newsroom from another home show a dead rodent, covered in maggots, that was found in a Collierville residence. And that’s not the only one. At another home in Collierville, Settle removed squirrels and rats, then sealed up parts of the roof with metal plates and screens near gutters.  So why are these animals headed to Germantown and Collierville? “It’s the vegetation, I believe,” Settle explained. “They have a lot of nice trees and bushes, a lot more food.” Roof Rat News Source 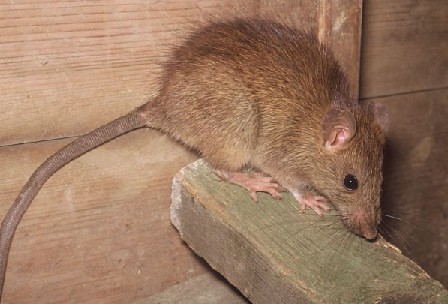 Roof rats need to be treated as vermin because they do carry and spread diseases. They transmit disease directly through contact. This happens when they contaminate food with their feces. They can also transmit diseases indirectly when fleas bite a diseased rat and then bite a pet or a person. It is a known historical fact that the bubonic plague was transmitted to humans from rat fleas. This was the cause of the Black Death in Europe, a devastating pandemic in the history of mankind. Roof rats can also bite people and pets thus transmitting the rat bite fever through a bacteria strain found in their mouths.

Roof Rats On The Rise In The Mid-South

(Memphis) The sound of footsteps on the roof this winter season probably isn’t reindeer, but rather roof rats. A Mid-South pest management company says it’s seeing a huge increase in the pesky rodents. Suburbs like Germantown are seeing huge spikes in calls year to year. What do you get when a mild summer follows after a warm winter? Pest experts say perfect mating conditions for rats. “They make a lot of them, 30 or 40 per year,” said Lanier James with James Pest Management. However, as colder temperatures move in so do rats, according to James. He says the rats will seek warmth in the attic and walls of your home. “The roof rat lives in trees, lives in vines, they’ll live in vines,” he said. “They love to go in voids of that nature. They get in some unique situations in home.” James says homeowners get unnerved when a rat dies, filling a house with smell of decay, but ripping down walls to remove a dead rat can be expensive.  Article Source On Roof Rats In Germantown

There are various ways to get rid of roof rats depending on how severe the infestation is. In the most severe cases, professional exterminators may be called to access the situation and deal with the infestation. However, it is possible to contain the population of roof rats and even keep them out of the house entirely. Here are some simple ways to keep these pests away.

Many Memphians may be experiencing some uninvited visitors. Terminix released a list of the top 10 cities with roof rat infestations, and Memphis has been ranked as number 1. Autumn is the most common season for roof rats because their outdoor food source has lessened. They are easier to distinguish from other better-known rodent relatives because of their long scaled tails. According to Paul Curtis, although roof rats usually stay out of plain sight, they are often times a sign of an infestation. Curtis also said they are most active at night and often leave smudge marks as result of dirt and oil. Roof rats tend to enter through buildings through holes, soffit vents, cables entering buildings and turbine and box vents of roofs. In October 2015, roof rats invaded Memphis suburbs, shocking residents. But that’s not the only time Memphis has had roof rat infestations. In September 2016, several Memphians found roof rats plagues their homes again. Source – Roof Rats Invade Tennessee Suburbs