Armadillos have been spreading steadily across the Southeast for the past several decades and have finally established themselves in Middle Tennessee. Credit: Cumberland Island National SeashoreNational Park il Tim White works for the Tennessee Wildlife Resources Agency.

That puts him on the front line of any change in the state’s fauna, including the arrival of armadillos. 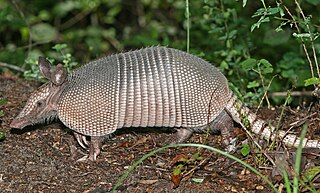 “I probably first started noticing them six or eight years ago around this part of the state,” he says, “and I’ve seen them in West Tennessee for the last 10 years.”

And White, a wildlife biologist, doesn’t just mean dead on the side of the road.

Alive! In open fields, woodlands, swamps, even just outside TWRA’s headquarters in Crieve Hall. There’s really no place they won’t go in their hunt for insects and grubs — armadillos’ main diet.

And that means they can be a nuisance.

“Yeah, they do root around,” White says. “They can root six or eight inches deep in the soil, looking for insects, so they can root up holes in your yard. But they don’t really compete with many native species for resources or for habitat.

“And so other than a few holes dug here and there, it’s not really all that bad.”

The influx of armadillos is readily apparent along the region’s suburban and rural roadways. The slow-moving, nocturnal mammals are an increasingly frequent casualty of Nashville’s ever-growing traffic.

It’s uncertain when they first moved into the state. The Tennessean reported in 1998 that one had been spotted in Nashville.

And no one knows how many armadillos there are, nor exactly how far they’ve ranged. There just hasn’t been enough interest to study them that closely.

Their origin story is clear, however, and it’s a little surprising. Many people might associate armadillos — specifically the nine-banded armadillo found most commonly — with Texas. But they’re actually native to Central America, cousins of the anteater and the three-toed sloth.

They started moving northward over a century ago. Most biologists cite a lack of natural predators outside the rain forests of Central America and a relatively high reproductive rate. Armadillos give birth to litters of identical quadruplets, and despite being solitary outside mating season, a single female can breed more than 50 offspring.

“And humans don’t really hunt them or harvest them for food very much,” notes White, “although during the Depression they were kind of known as ‘Hoover hogs’ or ‘poor-man’s pork.’”

Getting to that meat means going through their tough shells. Most species of armadillos protect themselves by curling up in a ball. The nine-banded armadillo instead digs a shallow trench, in which it hunkers down until potential predators give up.

But that’s pretty much armadillos’ only defense. Despite having long claws, they’re docile creatures, says White.

They do have a history of carrying leprosy, but White says it’s rare for them to transmit it to humans.

All in all, he says, they’re more of a novelty than a menace — a newcomer that Middle Tennesseans will have to make room for. Source

National park has sightings of the armored creature

The Nine Banded Armadillo has been added to the official list of species inhabiting the Great Smoky Mountain National Park. There have been sightings of roadkill in the last few years but never one caught live. A trail cam caught the armored creature roaming around the area. Armadillos first took up residence in Tennessee in 2013 near Sewanee on the Plateau and they usually avoid lower temperatures, which comes along with higher elevations, like in the smokies.

According to a Tennessee Wildlife Resources Agency wildlife diversity biologist urges people to keep a clear distance if you should happen to encounter an armadillo. Some armadillos can carry the bacteria that causes leprosy, so it is best to avoid direct contact with the creature. Most times, the armadillos are harmless and if you just allow them some space they’ll move on from your yard or other space you are occupying.

An armored invader is now the new king of the mountain in the Smokies.

Well, at least, there’s a new animal on the list of official species in the Great Smoky Mountains National Park.  A wildlife camera at Newfound Gap captured several photos of a nine-banded armadillo.

“It’s the first documented, live armadillo inside the park.  We had some sightings of roadkill just outside the park boundary in the last few years. But we never had an armadillo within the interior of the park, dead or alive,” said Bill Stiver, GSMNP supervisory wildlife biologist. Read more

Summary: The Nine Banded Armadillo has been added to the official list of species inhabiting the Great Smoky Mountain National Park. There have been sightings of roadkill in the last few years but never one caught live.

If you see an armadillo, leave it alone

If you see an armadillo, just leave it alone.

He said the nine-banded armadillo has been seen in our area since the early 2000s.

It’s hard to know how many are actually in the area because of their size and lifestyle, Simpson said. Learn more

Summary: Some armadillos can carry the bacteria that causes leprosy, so it is best to avoid direct contact with the creature. Most times, armadillos are harmless and will not bother you.